Psychology of the Observer
by Richard Rose

In his book, Psychology of the Observer, Richard Rose reveals the essence of his Albigen System and ways and means for going within to discover Reality. Of his many writings, Psychology of the Observer is the most indispensable to the sincere seeker. In it, Rose reveals the process that led to his Enlightenment—a triangulation psychology called the conciliatory principle—and directly lays out the Albigen System as a way for us to awaken.

If the following excerpt strikes your intuition or logic, place an order for the Psychology of the Observer.

The mind cannot be studied with the mind. It must be observed from some point, outside of, and yet superior to the mind.

True observation must be carried on from a superior dimension. The mind cannot be studied with the mind. It must be observed from some point, outside of, and yet superior to the mind. This process might be likened to the triangulation made in surveying, when the height of a mountain needs to be known without dragging chain every step of the way to the top. Two sightings can be made from a common base line to the top of the mountain, giving two different angles as the inside angles of the triangle. With this the two sighting-distances will be known, from which a perpendicular line,—from the apex of the mountain to its center within the mountain along the same base line, or plane,—will give the height.

That base line is the point of reference, and point from which all validity emanates. It begins as a short line, entirely separate from the mountain. It is outside the mountain. From it an imaginary string is drawn or dropped to the center of the mountain on the same level as the plain. The only other way to measure the height of the mountain with the same accuracy would be the drilling and measuring of a hole from the top, meeting a similar horizontal hole drilled on the level of the plain.

In chemistry, our point of reference is an agreement on certain bases of valence, bonding and element-nature. However, our triangulation really began with a concept of valence. We could not describe or predict without the idea-agreement or concept and its terminology.

Even the systems of triangulation or speculation in scientific pursuits are not infallible. At one time the basis for the whole concept of oxidation rested upon an erroneous concept or agreement called the phlogiston theory.

So the new theory as a basis from which to work should not be rejected merely because we cannot relate to it easily, or because (in psychology) we need to triangulate to find the conciliatory point, before we can work from that point of reference to properly evaluate the then inferior dimension, which we call the mind.

Actually the above described system of mind-evaluation is not a concept, except to those who have not been beyond the mind. And those who do not wish to go to the bother to try advised procedures to find such a point of reference, prefer to simply claim that it does not exist.

We need to explore at this point that which is meant by "triangulation to find that superior point of reference." 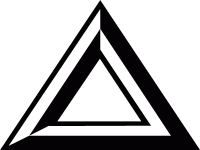 Triangulation is the geometric pattern of all human thinking. We know that we function from a relative way of observing. Our eyes triangulate or we could not be aware of differences in distance. The position of our ears picks up the direction of sounds coming in. Our understanding of gray is arrived at by our consideration of two opposites, black and white. Benoit (The Supreme Doctrine) speaks of a triangle of understanding in which the polarity of opposites form the two ends of the base-line, with the apex being the "superior conciliatory principle."

We can see by these observations, that not only does a thing need to be known in relation to its opposite, but it must be known from a third, impartially detached viewpoint.

If we take good and bad as the two polar extremes, by observing those two factors alone, we will never get beyond the knowledge that good is not bad, and bad is not good. However, when viewed from a superior, detached viewpoint, we can get the new definition that good and bad constitute a spectrum of consideration, which when viewed as a whole give us an entirely new concept of the processes of life and their relation to justice, to a space-time consideration,—or in regard to meanings of some evolutionary blueprint.

To find the superior point of observation we must admit that we must find a conciliatory apex-point whose nature and location is unknown to us. We know the two points at the base. They are consciousness and unconsciousness, seeming existence and seeming non-existence.

As the surveyor sighting for an unknown measurement, we must try to find that apex. If another surveyor has found the method of getting it, it would be a good idea to consult him. If there is no one to consult, we must educate ourselves as to ways and means. We must indulge in tentative concepts perhaps, and make some unnecessary sightings.

The process outlined as the "psychology of the Observer" shows the beginning processes of early triangulations. In examining our consciousness, or thought processes we find the Umpire aptly called a conciliating principle. However, upon scrutiny we find that it is in turn being observed, and when it is

properly scrutinized, it will be found to be a somatic monitor, being concerned with body-consciousness. We strike another line behind the Umpire and find ourselves observing the processes of the Umpire, and then the processes of the mind itself. And by this seemingly accidental discovery of mental processes we have placed ourselves automatically in a point of awareness that watches (occupies the conciliatory apex) the polar point of the Umpire and the polar point of the Higher Intuition. These two points are the dual functioning of the mind, which are the somatic Umpire and the extremely subjective mind, which are somewhat parallel in expression to the rational mind (and its lobe) and the dream mind (and its lobe) as discussed by Ornstein.

We do not become aware of the Higher Intuition at the same time that we discover the Umpire. Many people revel in the discovery of the Umpire. This exultation is described elsewhere as the Eureka experience. The mathematician discovers the harmony in a set of symbols. Suddenly the universe becomes a tightly wrapped sphere of laws, encompassing all action.

The Umpire is mundane, and the Eureka-man reacts in truly mundane style when he discovers it. He belabors himself with the study of symbols and laws, hoping to master the whole plan and subordinate the universe to his button-pushing intentions. If you even suggest a higher-intuitive method of looking at things, he will turn his back in derision.

But the Umpire is only one point on a plane of reference. There is another voice in us which hints that the Umpire may indeed be a charlatan that pretends to have everything under control for the individual. This Higher Intuition is less vocal than the Umpire, but it challenges the mind of man by pointing out such things which the Umpire cannot explain with its pretence of logic. The mirage and the miraculous defy the objectivity of the Umpire. The sixth sense causes uncertainty in the previous five.

As has been said before these mental workings are similar to intense meditation, or the result of intense meditation. I am continually running across references in Buddhistic and Brahmanistic writings which indicate that the sages of the Himalayas and the Ganges knew about these mental stages, for perhaps a thousand years.

An accompanying diagram (Plate I) will give some idea of direction of our search for higher Reality, which simultaneously means the finding of the True Self. 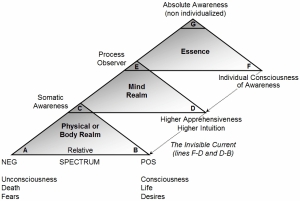 » Order books, audio, and video products by and about Richard Rose from Rose Publications.

In the end, it seems, there is no real observer behind it all...It is the dream of an ultimate observer—a place of final refuge—that blocks the light. When observing stops, the Real appears—crystal clear and empty.