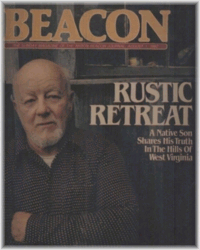 The following essay provides insight into core teachings of Richard Rose, his direct mind research, and the Albigen System as seen through the eyes of a sincere seeker and student who worked directly with Rose. The events cover nearly a decade starting in 1985.

…what do you hold true with such certainty that you would be willing to bargain your soul as collateral for your convictions?

What do you know for sure? You, dear reader, what do you hold true with such certainty that you would be willing to bargain your soul as collateral for your convictions? Or perhaps you have never contemplated the vastness of the universe, the mind, and the marriage of these two. Quantum physics is one of the few scientific avenues that have shattered many of the realities we all hold so dear. But Richard Rose, through rather unconventional means, shatters these same realities for those lucky enough to meet him.

I found myself driving hurriedly along an extraordinarily windy road, determined to arrive on time for the 10:00 a.m. convening of the August Chautauqua meeting. After riding over a final stretch of bumpy unpaved road, I arrived at the then unfamiliar wooden picket fence that shielded most of the farmhouse from view. The top level of the house itself looked rather unmaintained, the paint appearing a little worn from the elements. Pulling my car up to a rather stern looking fellow (and unfriendly, I thought), I asked about the meeting, now underway, and was directed to a grass parking area. 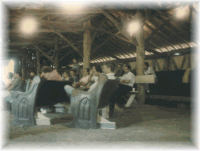 At the end of a short walk through a scenic wooded area, I approached a rustically constructed pavilion-like structure. Pausing to look more closely, I noticed the massive hand-hewn timbers, under which perhaps 50 individuals were seated, all in a semi-circle facing a stocky man at the podium. I knew immediately he was Richard Rose, for I had seen pictures of him. More importantly, I had read all of his books beforehand.

Rose had just completed asking each person in the audience, one by one, the question, "What do you want out of life?" Now, after seating myself in what I thought was a rather safe and inconspicuous area in the back row, I found myself facing Rose's attention—and the same challenging question. I hadn't even thought of such a question before, let alone contemplated it. I muttered, almost inaudibly, "I guess it would be Wisdom." Rose jotted down my answer, as he did everyone else's, and proceeded through a Lecture of Questions meant to provoke deeper thinking among those in the audience. I heard almost nothing—my thoughts were racing too fast, struggling to gain a perspective on what I was doing there, and what Rose was all about.

And so began my first venture in a long line of visits to Richard Rose's farm in the hills of West Virginia...

Let this writing entail a brief deposition on the effects Richard Rose has had upon its author, starting August 1985 to the present (March 1993). Rose does not so much go out of his way to directly change people, as he does to provide information that will enable them to change their selves. He has communicated his personal findings, spanning a perspective of 75 years, through scores of lectures at universities across America. He has been published in newspapers and magazines, and has spoken to a number of radio and television audiences in cities across the country. Most importantly, Rose has completed seven books that have reached thousands of readers. And his diligent efforts in creating and sustaining the TAT Foundation (TAT denotes "Truth and Transmission") have fostered communication among hundreds of students of the Truth. I have written elsewhere of Richard Rose's life (see Richard Rose: Spiritual Teacher Who Changed Lives), and prefer now to focus on my personal conclusions about him.

At the risk of being labeled a zealot, I should make it quite clear that I believe Rose's Albigen System and his direct mind research is the most astute philosophical system in the United States, and possibly the best in present world-wide circumstances. This is not mere belief, but a fact proven through personal experimentation and investigation. The system's basic principles have etched a mark on my Essence for eternity. And for Rose's efforts, I express deep gratitude, although I know he does not seek nor expect thanks but rather know he holds a conviction to transmit the system's advice to anyone with the ears to listen. And let there be no doubt that anyone with the intuition and tenacity to carry through with Richard Rose's ideas could know their Source.

Let me also state that, as in all philosophers, one cannot peel away a certain philosophy as a distinct entity from the man himself. Rose talked endlessly about his lifelong experiences, and with candor discussed his philosophical conclusions founded on those experiences. Rose's true gold mine lies within his book, Psychology of the Observer, in which he revealed the details of his system of reaching Enlightenment. Compare this paperback book—say one-quarter inch thick—to the rest of Rose's discussions, theories, and experiences, and one would see a stack of books ten feet high. And so if reading all of Richard Rose's writings sparks an interest and inspires his readers, then meeting him personally certainly blasted open a door to a whole new universe.

It would be an easy task only for a few to lay claim that a unique event in life permanently changed their Being. Over eight years time, can I say with certainty what mind-set normal maturation would cast without encountering Richard Rose? A state of mind may change as one grows older, but a state of Being changes only with introspective effort. And so it was this advice—to go inside myself, to observe the thinking within and emanating from my Mind—that Rose conveyed through many different approaches over the years, and resulted in my change of Being. Changes only occurred through personal effort, through seeing erroneous thought processes and taking action to avoid future errors...through watching the internal conflicts play themselves out...through logically and intuitively choosing the most propitious path at the forks in the road. Such actions have changed Being.

Now, dear reader, I hasten to add that even the most diligent student of Truth, if he had 100 years to study every phrase of every writing of Richard Rose, and listened intently to each audio recording—such student would take but one step of a thousand if he did not personally practice the kernel of Rose's advice. That is, practicing a lifestyle that is conducive to seeking the Truth. In other words, having too many irons in the fire and spreading one's priorities in too many directions, will not expeditiously lead to tangible results, no matter what direction one chooses. And this most definitely includes sexual proclivities. A person might scoff with skepticism at the thought of celibacy, but it is indeed at the core of many religions, magic and miracles. Henry David Thoreau expresses it most eloquently in Walden:

Yet the spirit can for the time pervade and control every member and function of the body, and transmute what in form is the grossest sensuality into purity and devotion. The generative energy, which when we are loose, dissipates and makes us unclean, when we are continent invigorates and inspires us.

I am not going to labor here concerning the merits of sexual continence, but I express with the deepest sincerity that eight years of personal experimentation and 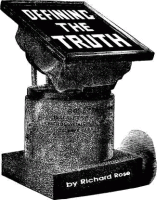 corroboration have led me to clearer thinking, a focused mind, focused energy and improved intuition. I can say with certainty that Rose's advice on celibacy is not to be brushed aside lightly (for more information, see the document titled Celibacy in our Searchwithin download center).

Now I come to the intangible items, and certainly the less important ones but nonetheless valuable. I have never witnessed a miracle, per say, but I have witnessed Rose's ability to step inside another's mind with his mind, directly and without prejudicing the mind of the other's beforehand. I have watched him allow direct mind communication to occur with others, including myself. During several rapport meetings, in which a number of individuals silently waited for a manifestation of energy, Rose's influence was extremely prevalent to the minds of most in the group. On one occasion, Rose knew exactly what I was thinking and said so aloud. Without saying a word, I changed my thoughts, to which Rose accurately responded, aloud. Whether encountering Richard Rose in a rapport session, or just in the course of normal conversation, I came away re-inspired, with convictions shaken, and internal reflection sparked anew.

Another intangible though important influence of Rose concerned his political discussions as well as his views on humanity and its relationship with nature. He certainly swayed my opinions regarding the nature of man and woman—their egos, vices and pathetic games. I speak not with contempt for humanity, but with dire concern for its future. The voracious appetite of the State is appalling, no less than its sister institutions such as Education, Justice, Psychology, and The Law. The more I observe humanity, the more convinced I become about Rose's assertion that it is a manure pile; leaving, therefore, only one pragmatic direction, which consists of helping others in their efforts to discover the Truth. And so I am much less naive than during that lonely trip to the farm eight years ago.

Dear reader, now you nave a brief synopsis of my experiences with Richard Rose. He has provided me with a system of concerted introspection, clearer thinking and improved intuition. Most of all, he has provided me with direction, self-confidence, and a more skillful disciplined mind. Rose answered all of my questions except the one all seekers struggle to find on their own. That is, Who Am I?

» Read our guidelines and tips for investigating a spiritual teacher, system or group.

We do not in any way solve the problem of creation, we experience the reality in which the problem is seen as the product of illusion.