A New Earth: Awakening to Your Life's Purpose
by Eckhart Tolle

How do Tolle's writings relate to Richard Rose's teachings?

A New Earth aligns with the "view is not the viewer" message that Rose often conveyed in lectures and writings.

The authors of SearchWithin.org have watched the meteoric rise of Eckhart Tolle over the past 5 years, starting with The Power of Now (1999) and culminating in his latest book A New Earth (2005) and weekly online sessions through The Oprah Winfrey Show (2008). In our estimation, Tolle's essential message aligns with the ageless teachings of those who have studied the mind from a perspective based in undifferentiated awareness. His books offer a simple message for those who would turn inward for answers. In fact, though comparing Tolle to Richard Rose is an apples-and-oranges proposition, A New Earth aligns with the "view is not the viewer" message that Rose often conveyed in lectures and writings. Along parallel lines, Tolle writes:

The greatest impediment to the discovery of inner space, the greatest impediment to finding the experiencer, is to become so enthralled by the experience that you lose yourself in it. It means consciousness is lost in it's own dream. You get taken in by every thought, every emotion, and every experience to such a degree that you are in fact in a dreamlike state. This has been the normal state of humanity for thousands of years.

But A New Earth isn't about establishing a contemporary paradigm involving utopian beliefs. Quite the contrary—he says that through awakening, each person will change humanity by genuinely carrying out the calling of our True Nature, which doesn't involve replacing our existing situation with yet another false set of ideals. Change will come about through ego diminishment and, once an individual is Awakened, through interaction with others in ways that may be quite ordinary.

In Tolle's words, Awakening is a shift in consciousness in which thinking and awareness separate. This might seem like a simple message, but it is the core of Rose's diagram—called Jacob's Ladder—where he outlines a method of Becoming through a retreat from error. With introspection, a seeker "climbing" Jacob's Ladder finds himself or herself watching the mind from an anterior and superior vantage point called the Process Observer.

On the other side of the spectrum, only a small amount of space in A New Earth is devoted to harshly attacking humanity's situation. However, he makes inroads on occasion by pointing out that the collective madness is worthy of a very skeptical eye. For example, near the beginning of the book, Tolle cuts to the chase:

The collective manifestations of the insanity that lies at the heart of the human condition constitute the greater part of human history. It is to a large extent a history of madness. If the history of humanity were the clinical case history of a single human being, the diagnosis would have to be: chronic paranoid delusions, a pathological propensity to commit murder and acts of extreme violence and cruelty against his perceived "enemies"—his own unconsciousness projected outward. Criminally insane, with a few brief lucid intervals.

In the first four chapters of The Albigen Papers, Rose elaborates on our stark situation by deeply delving into the social illusions inherent in religion, psychology, and gurus and unique systems. His goal, of course, is to provide tips and shortcuts that would allow the seeker to circumvent the obstacles Rose encountered in his own youthful search.

We also admire the spiritual depth sprinkled in several locations in Tolle's book. Here's an except that illustrates his profundity:

Some years ago when visiting China, I came upon a stupa on a mountaintop near Guilin. It had writing embossed in gold on it, and I asked my Chinese host what it mean. "It means 'Buddha' " he said. Why are there two characters rather than one?" I asked. "One," he explained, "means 'man.' The other means 'no.' And the two together mean 'Buddha'." I stood there in awe. The character of Buddha already contained the whole teaching of the Buddha, and for those who have eyes to see, the secret of life. Here are the two dimensions that make up reality, thingness and no-thingness, form and the denial of form, which is the recognition that form is not who you are.

Our gripes? We wish A New Earth would have included an in-depth section on Tolle's Realization that occurred at age 29. More importantly, we see two possible traps for Tolle's readers. First, this book will have widespread appeal because it focuses on ways to improve our lives. Although Tolle repeatedly encourages readers to avoid ego improvements, we think many readers will interpret the advice as tips for a better life, improved relationships, getting along with coworkers, etc. and miss the core message that "individualized" awareness is the first step toward finding the way home to our final destiny—Absolute Awareness. Second, we foresee many readers taking Tolle's message to heart without experiencing the dichotomy between the view and the viewer. In other words, readers may be prone to believing rather than realizing their true situation through the experience of Awareness.

In summary, A New Earth is a bit light on hard-core directional material, which will appeal to a large faction of seekers who believe "we are already Awareness, so don't bother seeking for anything." Yet Tolle manages to repeatedly confront the biggest obstacle of all, which is the false belief that enhancing our ego-qualities—including the spiritual ego—will somehow solve the seeker's dilemma. This book is worth your time. 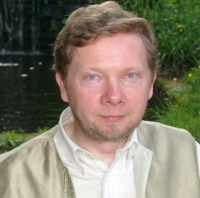 A New Earth: Awakening to Your Life's Purpose